Skip to the content
Chicken, Potatoes, and Corn Slow-Cooker Chowder
admin
November 17, 2020
10:28 am
0
Are you ready for the soup? I am! When my friend Maribeth asked me if I had seen the recipe for Sweet Potato Chicken Corn Soup in the latest copy of Southern Living, I hadn't.But when Maribeth is excited about a recipe, I get excited too! She is an accomplished cook and enjoys spending time […]

Are you ready for the soup? I am! When my friend Maribeth asked me if I had seen the recipe for Sweet Potato Chicken Corn Soup in the latest copy of Southern Living, I hadn't. 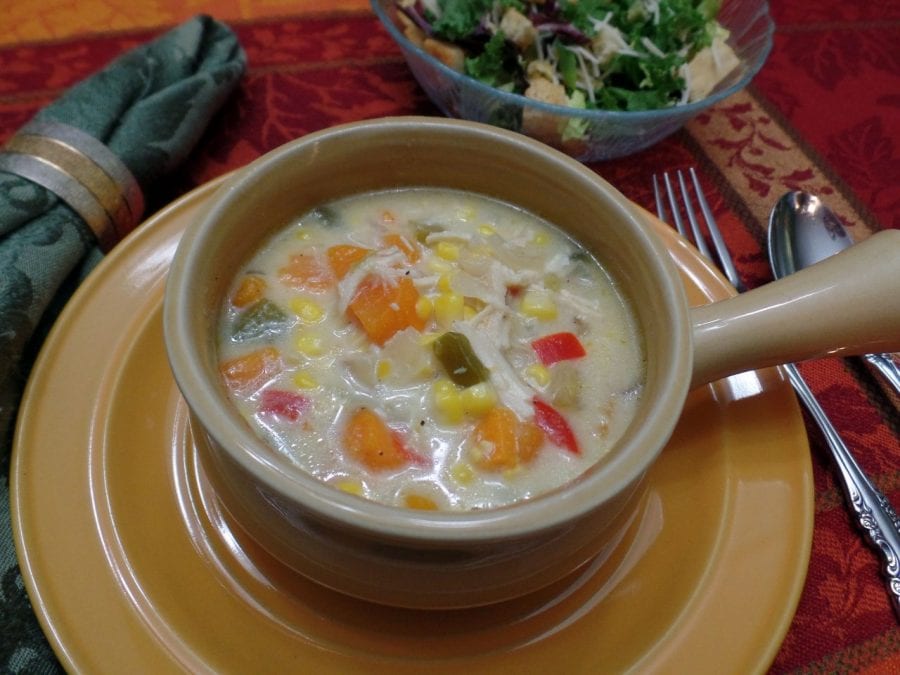 But when Maribeth is excited about a recipe, I get excited too! She is an accomplished cook and enjoys spending time in the kitchen. The chef, my dishwashing sous chef mother and I enjoyed many meals, snacks, appetizers and delicious treats from Maribeth's kitchen.

Once I looked at this recipe I knew this one would be no exception to the long line of recipes I have collected from Maribeth and Southern Living! 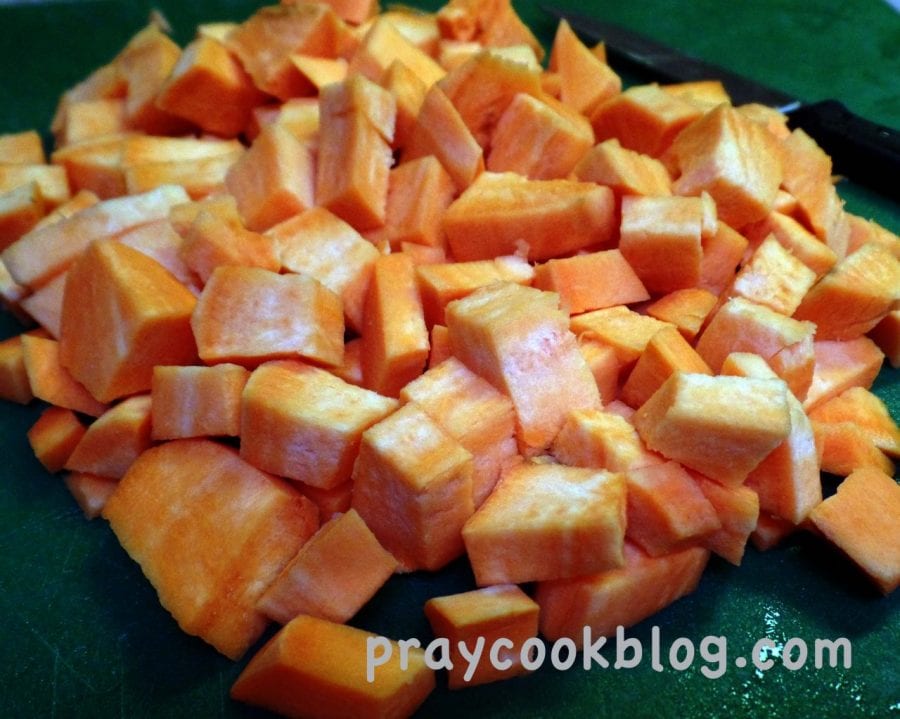 We are fans of sweet potatoes so this is the first ingredient that caught my attention. Plus, I like to rationalize that if it contains sweet potatoes then it must be good for me! These sweet potatoes appear to be a little white in the photo, but it was just my too bright photo! 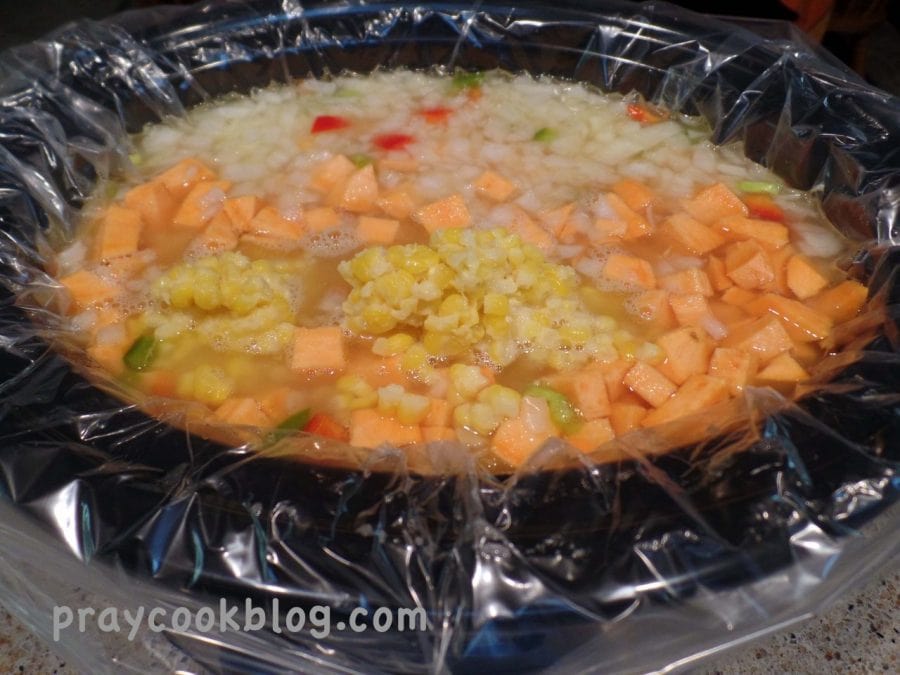 This chowder is as pretty to look at as it is delicious to eat. It's also easy because the first 12 ingredients are added to the Crock-Pot first.

I added white potatoes to the original recipe because I like the color and flavor highlight of a few white potatoes. In addition, I changed the process of cooking the chicken.

Southern Living states that "our testers recommend using bone-in chicken breasts for a more tender and juicy result than bone-in."

The original recipe calls for placing raw, bone-in skinless chicken breast with the rest of the cooking ingredients for the first 4 hours. I am picky about cooking chicken and I don't like to put it with other ingredients that will end up in soup.

Have you ever seen the chicken scum that floats to the top when you boil chicken? Yuck.

You can also tell from the image of the soup in my Crock-Pot that I always use a Reynolds Slow Cooker Liner. In fact, I think Reynolds should sponsor this post, but sadly they aren't! But - I still want you to know about liners because they make cleaning easy.

And I always want to make things as easy as possible for my dishwasher sous chef mom! Did I ever tell you that she washes all of our dishes?

I know, but don't be jealous. Isn't it great to cook and have the dishes and the kitchen cleaned like magic! Thanks Mom! 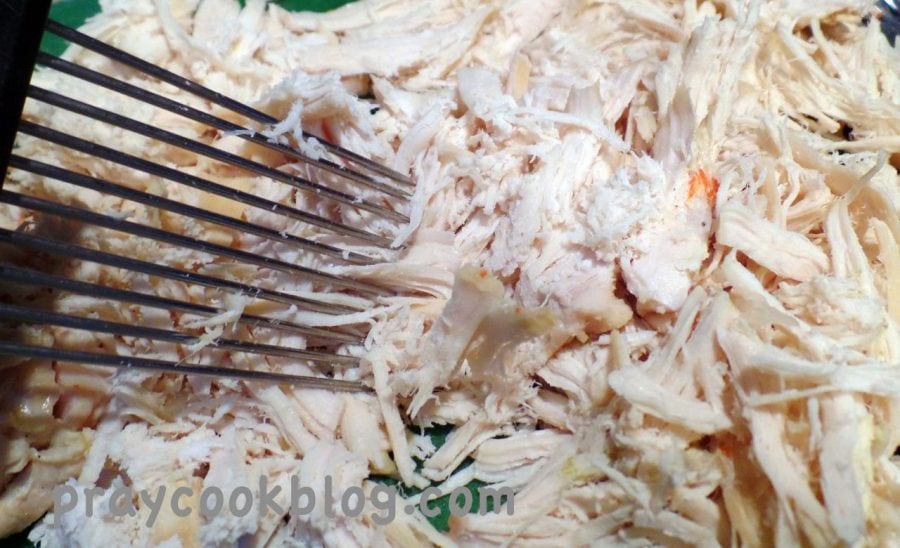 My favorite grated chicken after cooking in a pot.

I suggest you start with leftover chicken, cut or shredded. Or cook the chicken ahead of time in chicken broth or my personal favorite suggestion:

Place the chicken breasts in the Crock-Pot with 1 cup of the salsa. Cook on high for 3 to 4 hours. Remove from the Crock-Pot, let cool slightly then shred. This chicken is soft and lightly seasoned. 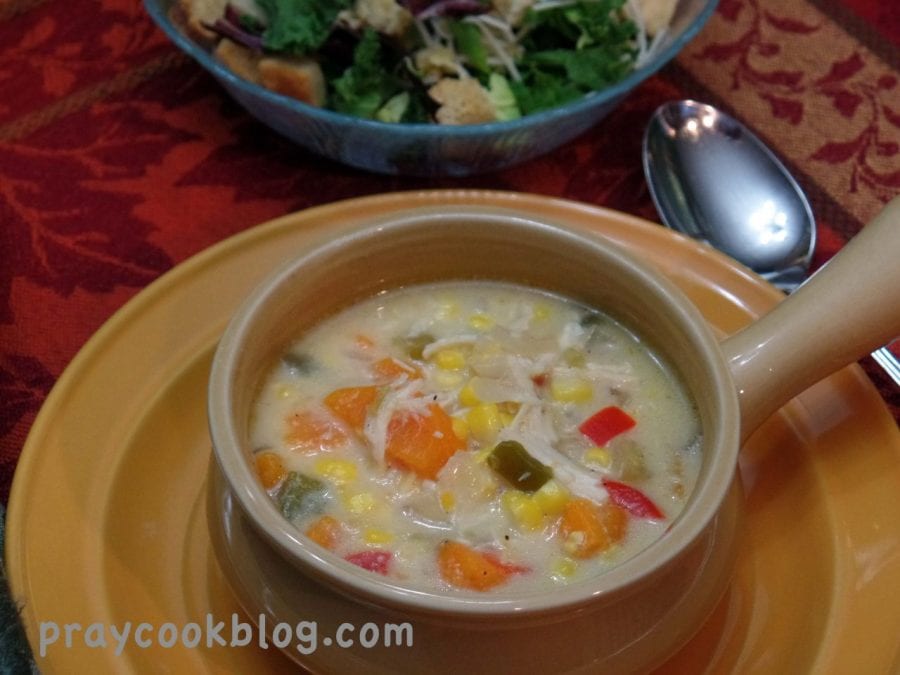 I served this soup with a superfood kale salad and it was a total hit! As is often the case, this soup gets better and better for several days after cooking. 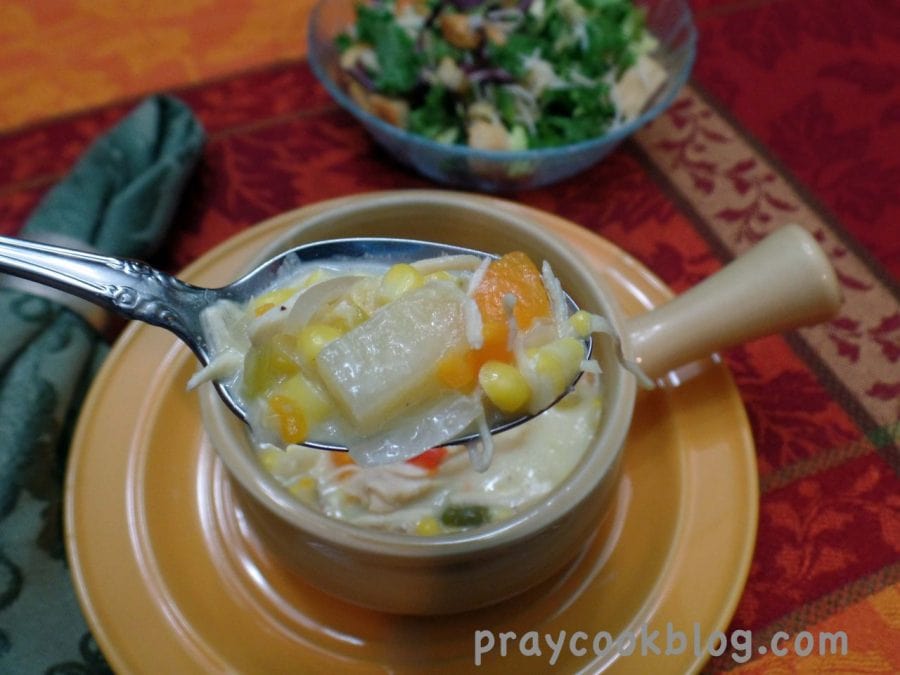 Do you want to bite?

Cooking this soup in the Crock-Pot filled the house with a wonderful scent of something love coming from the kitchen! My soup-eating chef added a touch of hot sauce to his portion.

It gave me the idea to add chili flakes to the remaining soup. I added 1 1/2 teaspoon and it was a perfect addition to the creamy soup. I added it as a "highly suggested" option in the recipe!

If you have any other favorite soup-worthy vegetables, this is the kind of recipe that can be tweaked to make it your own! Thank you Maribeth and thank you Southern Living for inspiring this recipe!

* Cook the chicken ahead in chicken broth or my favorite suggestion: Place the chicken breasts in the slow cooker with 1 cup of salsa. Cook on high for 3 to 4 hours. Remove from the slow cooker, let cool slightly then shred. This chicken is soft and lightly seasoned.
* Red pepper flakes optional. They don't make the soup "hot" but add a nice layer of flavor.
* Can use only sweet potatoes if desired, but adding the white potato goes well with other vegetables.
* Cornstarch - 5 tablespoons will thicken slightly. I prefer 8 tablespoons for medium thickness to the chowder. 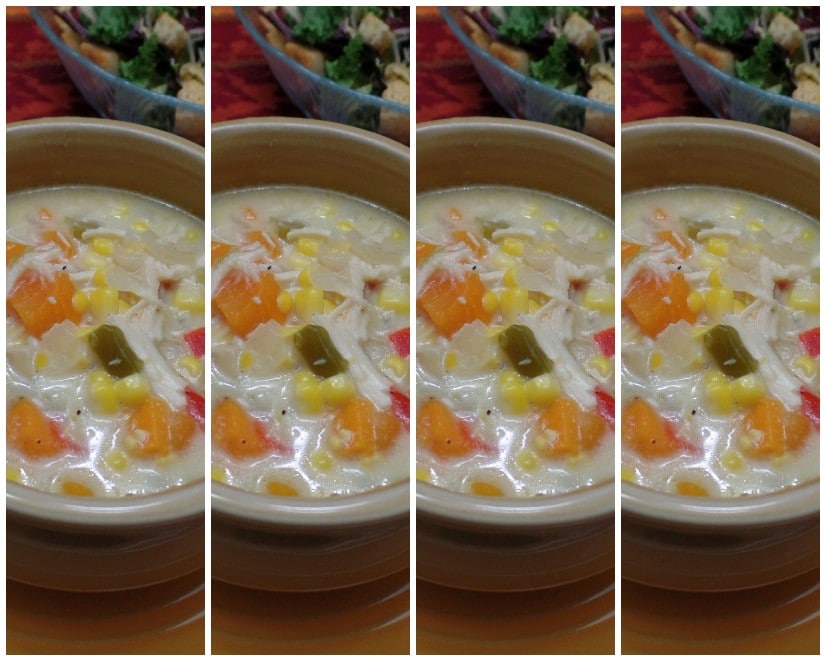