Skip to the content
Posole Rojo
admin
November 17, 2020
4:40 am
0
Posole is the name of the hominy in Mexico. Posole Rojo is a soup made from hominy, pork shoulder and a mixture of reconstituted dried red peppers. It's an earthy blend of absolute scumptiousness, my new favorite soup. I was inspired by a Posole Rojo recently added to the menu at the Cantina Los Charros […] 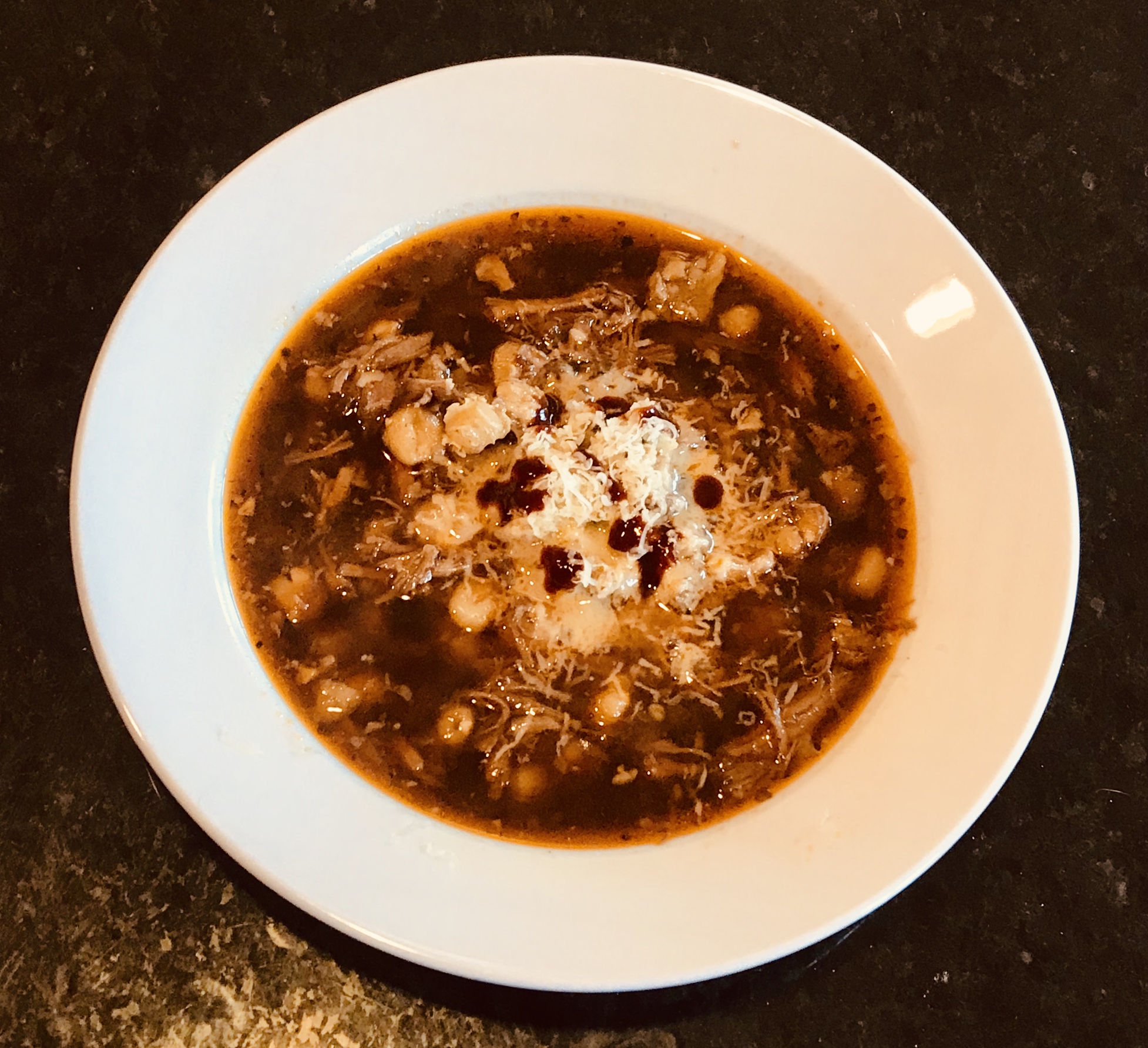 Posole is the name of the hominy in Mexico. Posole Rojo is a soup made from hominy, pork shoulder and a mixture of reconstituted dried red peppers. It's an earthy blend of absolute scumptiousness, my new favorite soup. I was inspired by a Posole Rojo recently added to the menu at the Cantina Los Charros side of Essex Restaurant in Centerbrook, CT. Essex has two kitchens and two sides, one a farm-to-table tour de force with a menu that changes monthly, and the other a very relaxed and friendly place, with a long bar, a kitchen open and the best Mexican food. in CT. This is my cheers.

To help take over Cantina Los Charros Posole Rojo, I worked from a Food Network recipe I found online. Here are the assembled ingredients, what fancy trouser lovers call the Mise En Place: 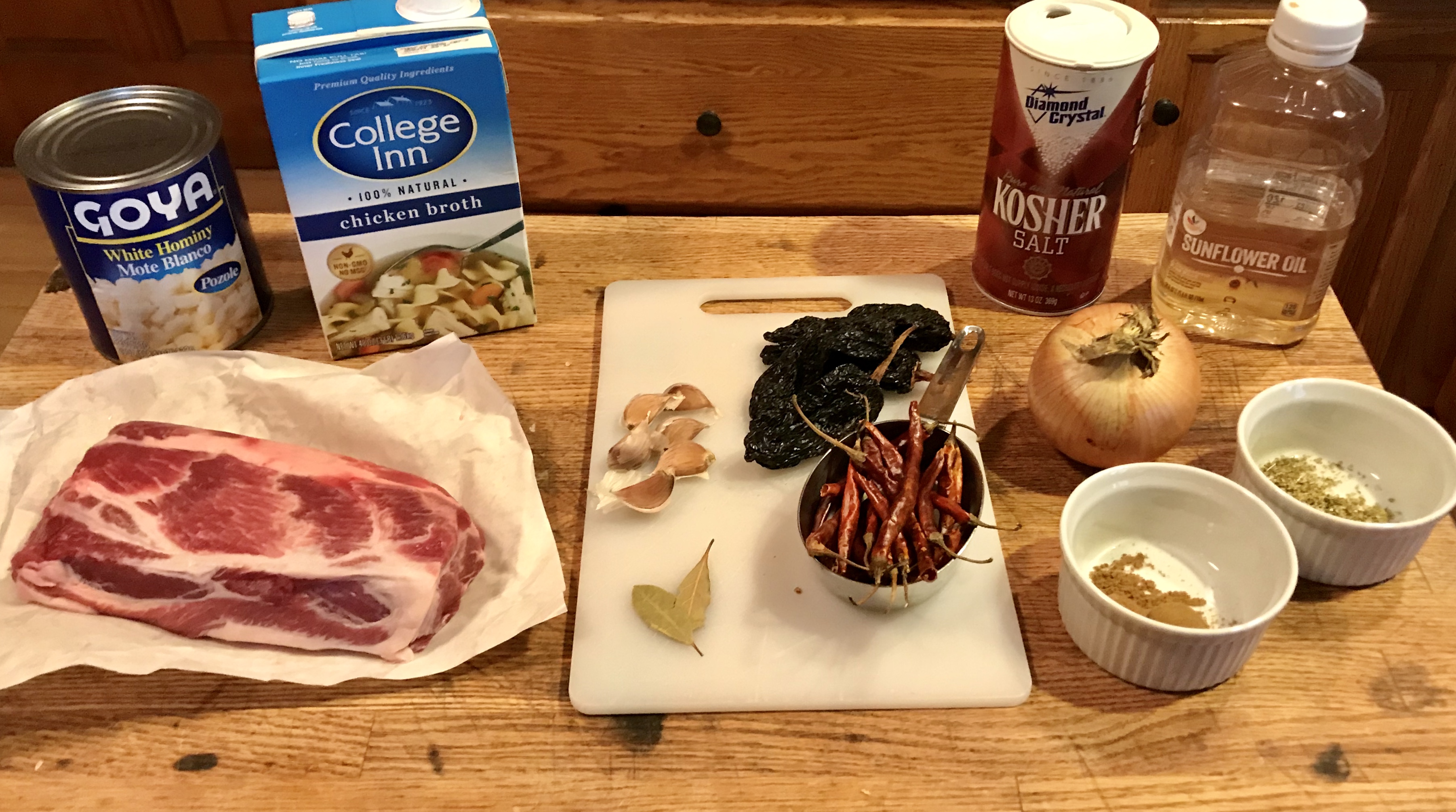 The first step is to seed and reconstitute the dried peppers: 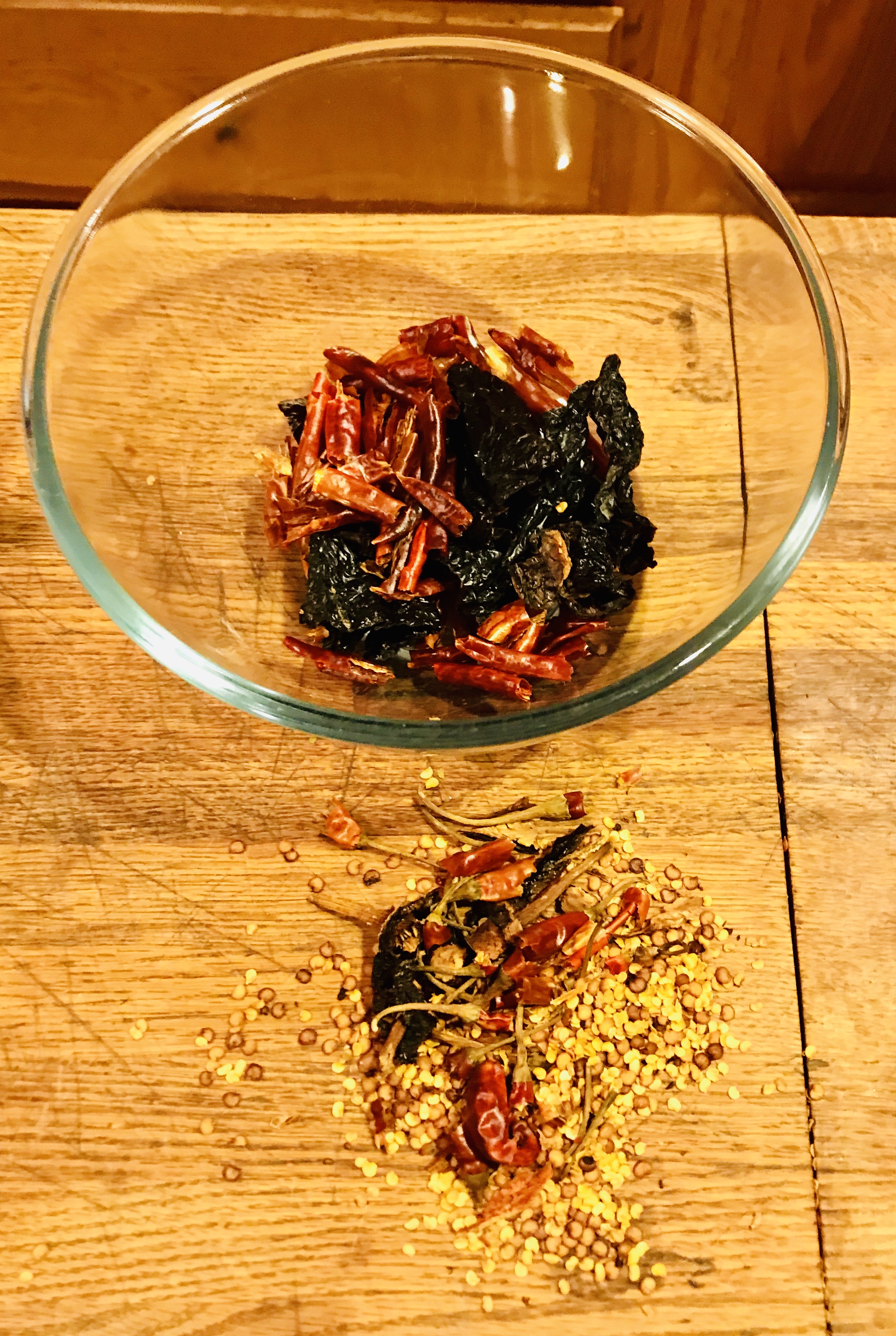 Above are the stem and seeded Arbol and Ancho peppers. The Arbols provide the heat and the Anchos provide the flavor. Removing the seeds tames the extreme heat of the Arbols. You cover them with boiling water, immersing the peppers with a plate and let infuse for 30 min: 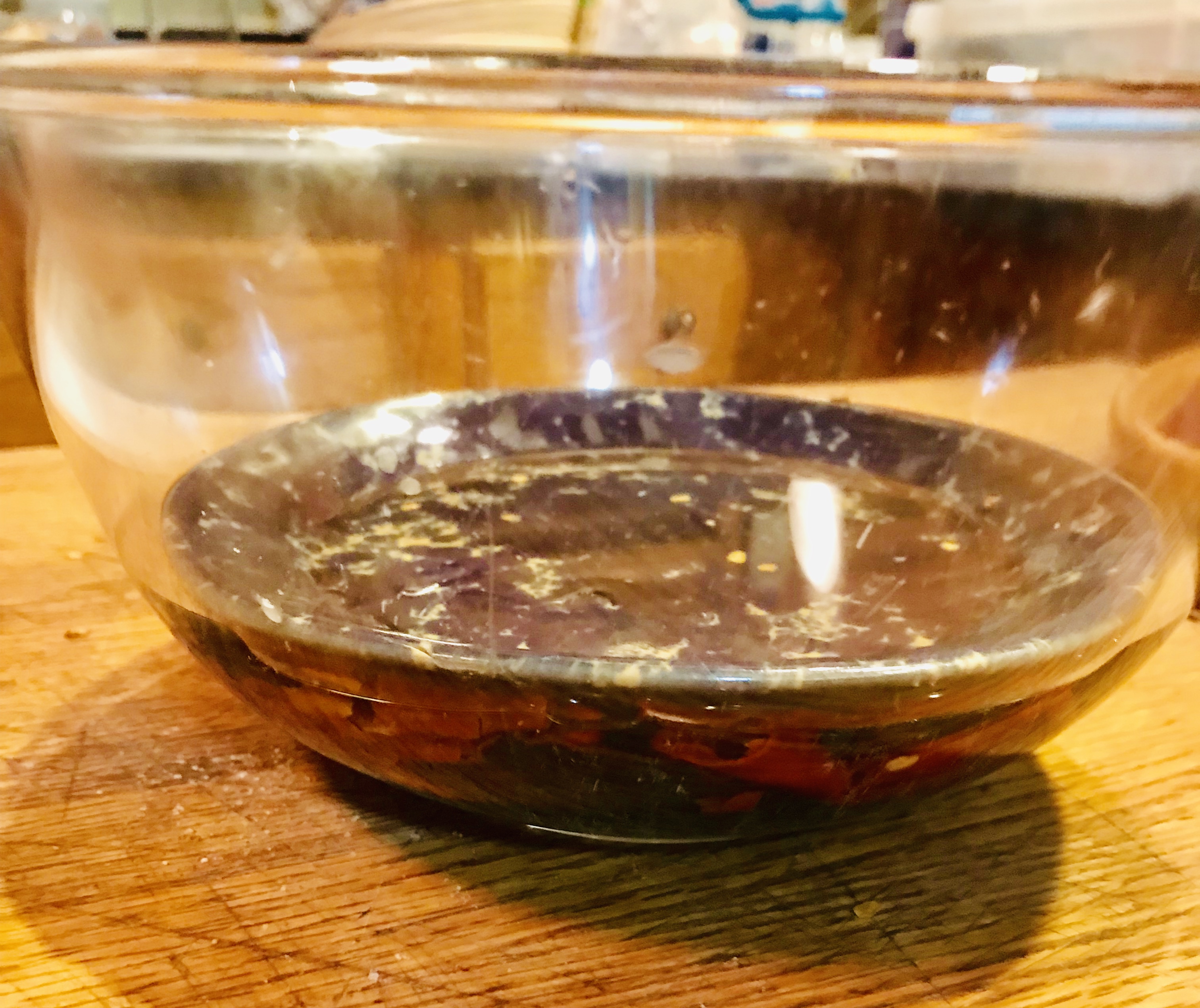 You then put the peppers, soaking liquid, and peeled and sliced ​​garlic cloves in a food processor or blender and spray into a smooth puree. You then push it through a fine mesh sieve, throwing out the solids. 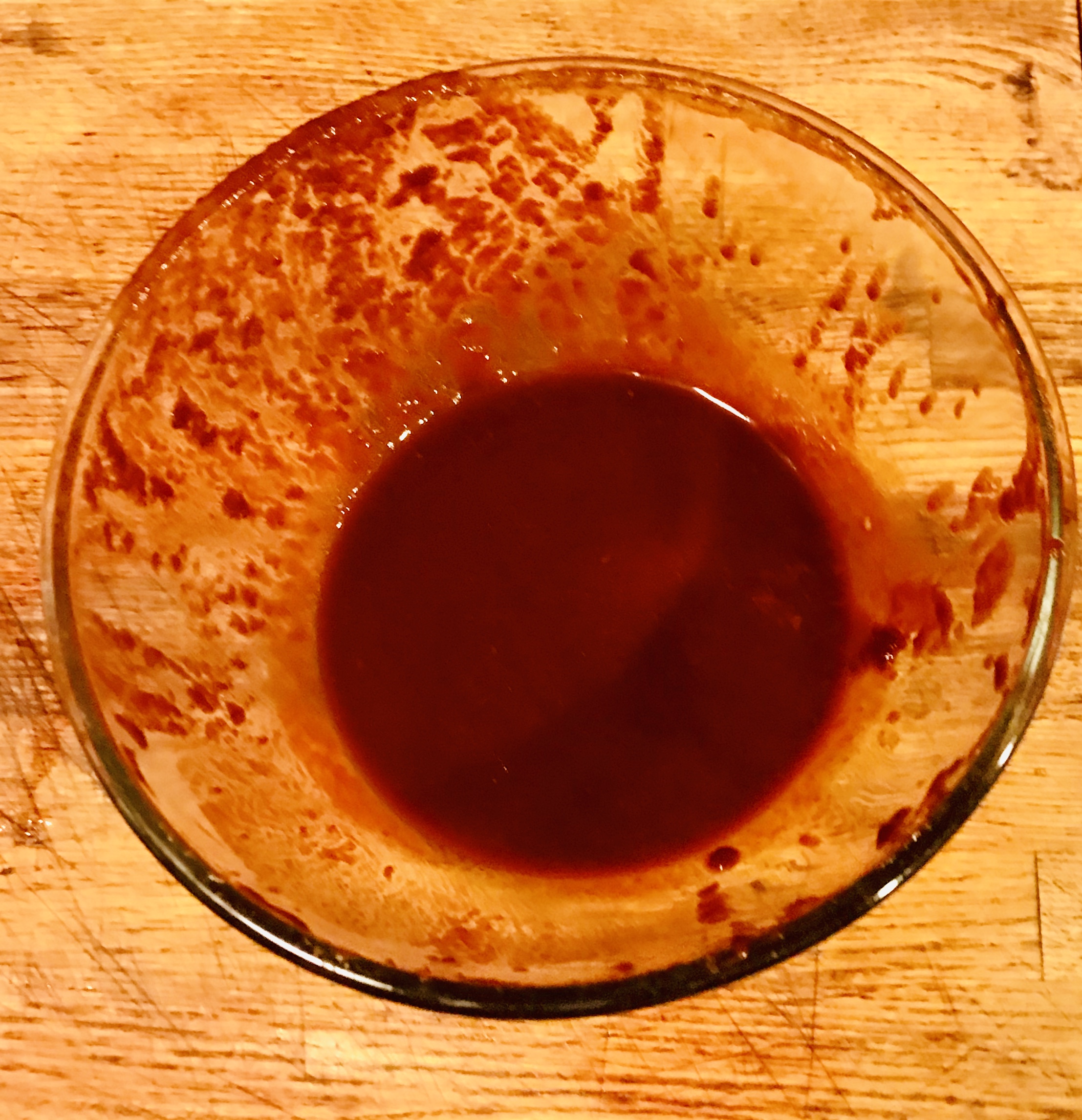 Above is what I had left of the filtered chili sauce after adding 3/4 cup to the soup. I used some of it to baste the finished soup.

I started piecing together dried chili peppers when I made the Food Lab's best short rib chili (see Cornbread with salted jalapeno pepper). The Food Lab's recipe only uses the chilies without the steeping liquid, so you end up with a paste rather than a sauce.

But whether it's a paste or a sauce, I've never looked back. I even threw away what was left of my chili powder bottle. Reconstituted dried chili peppers have an incredible depth of flavor that you just can't get from chili powder.

The next step is to sauté 1 chopped onion in 2 T of vegetable oil in a casserole dish. Once the onions are tender, you push them to one side and brown the pork shoulder in the same pan. Before chopping and sautéing the onions, I cut the pork shoulder into 2 large pieces and sprinkled each of them in a mixture of cumin and 1/2 teaspoon of salt, so the pork could rest. for a while in the mixture: 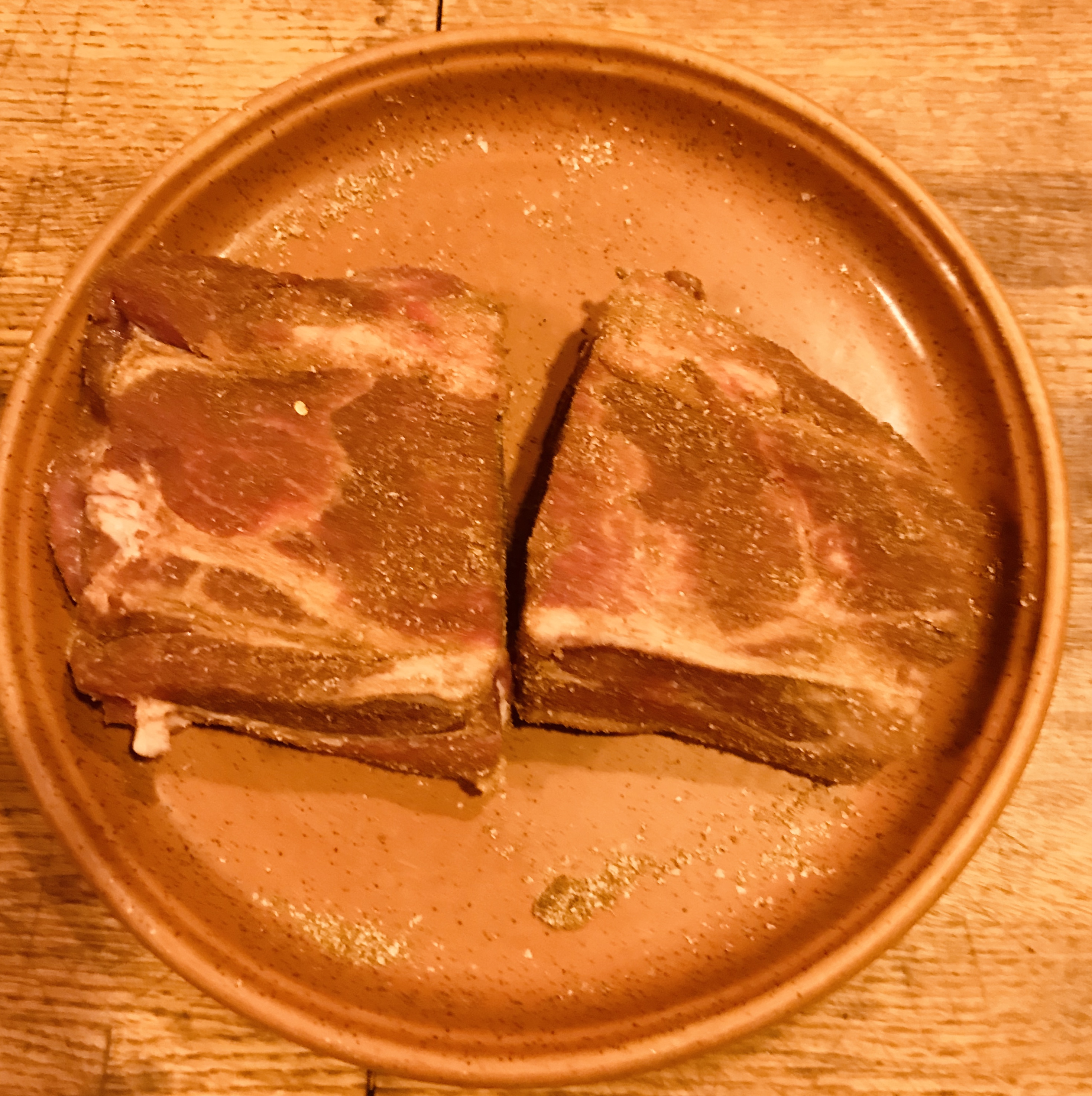 Once you have softened the onion and browned the pork, add the chicken broth, oregano, bay leaf and 1/2 cup to 3/4 cup chili sauce, to taste. The Food Network recipe also calls for 2 cups of water, but I would leave that aside next time for a thicker soup. You can always add water or broth later if needed. Bring to a boil, then reduce heat to maintain a low boil. Cover partially and cook, turning pork a few times, until tender, about 3 hours. 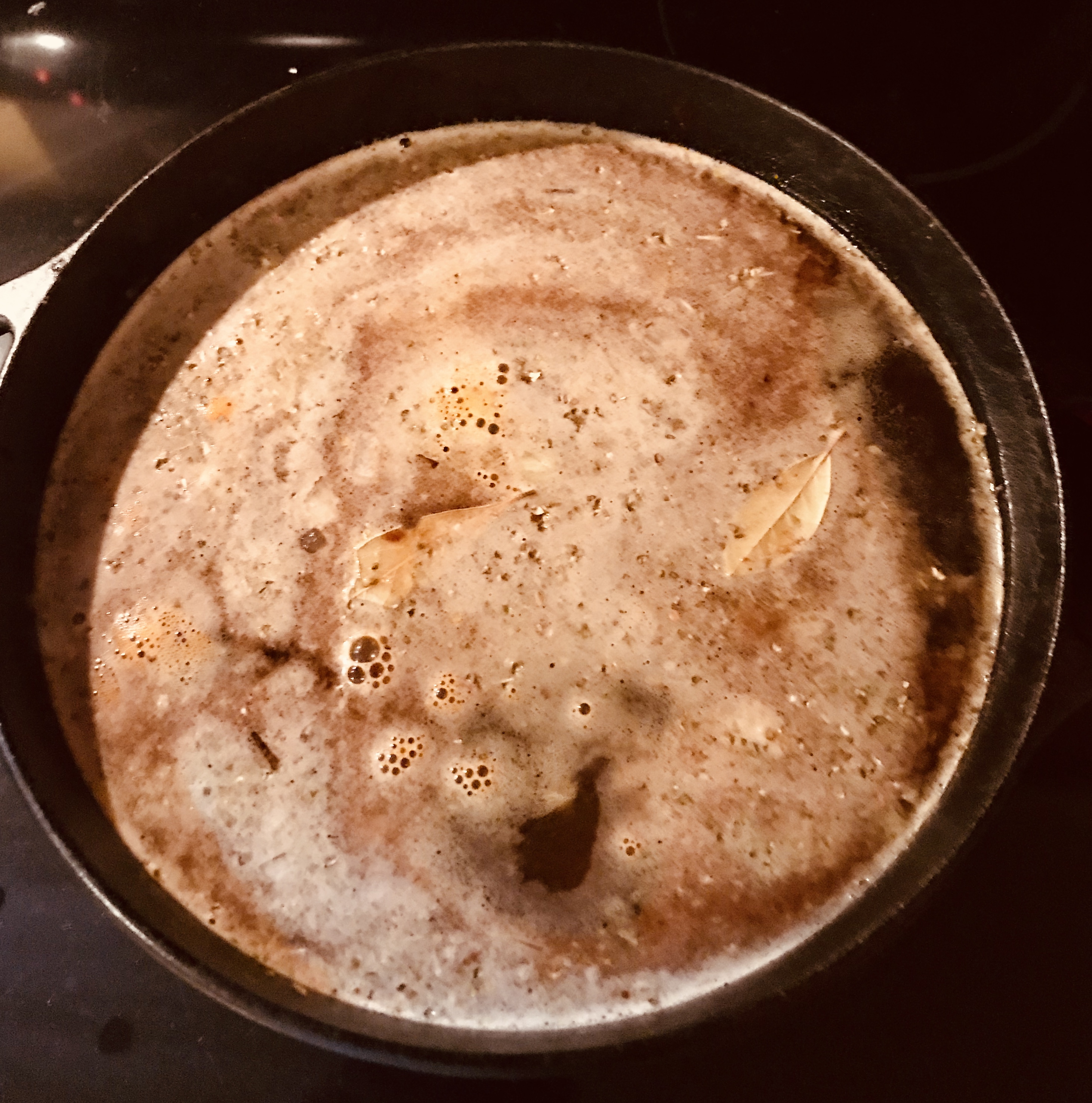 You then add the drained and rinsed hominy and continue to simmer, uncovered until the pork begins to collapse, about an hour more, Remove the bay leaf. Transfer the pork to a cutting board, roughly chop and return to the soup. Add water or broth if the posole is too thick. Season with salt. Serve with assorted garnishes. The photo at the top of this post is my first bowl, with just some grated Vasterbotten cheese and some of the chili sauce. For my second bowl I used these two toppings along with tortilla chips, chopped cilantro, avocado, and marigold petals that I had on hand from my weekly Trifecta Ecosystems harvest: 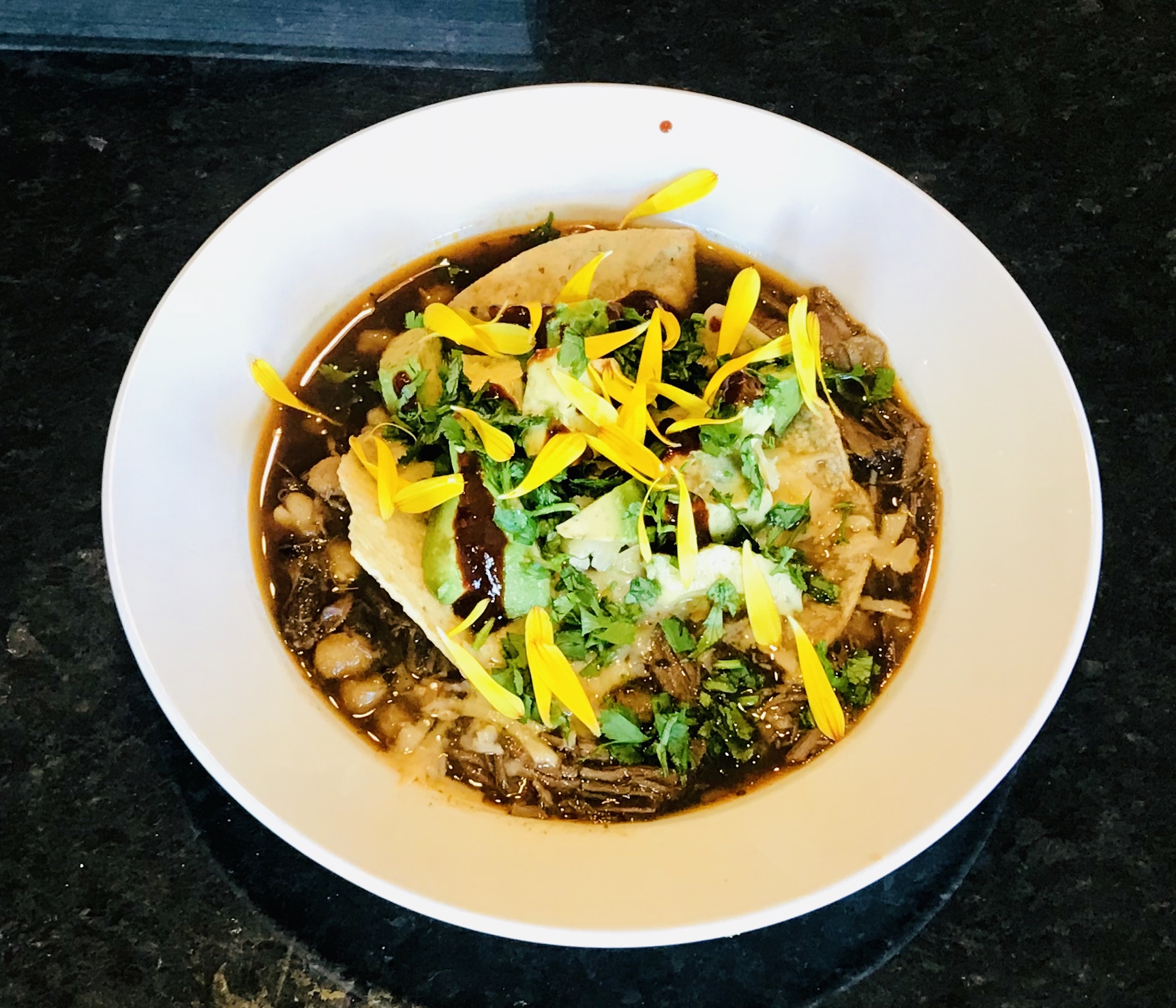 La Cantina Los Charros fried the hominy before adding it to the soup. This gives it a crispy texture which I liked. I tried to make it, but couldn't make it crisp like they did. Will continue to experiment.