Fantasies Made of Words – The Good Men Project
admin
November 20, 2020
3:59 am
By James A. Haught A friend of mine is a faithful religious who is trying to reform my pagan ways. He sent me an email saying: God is love - period. He offers us... 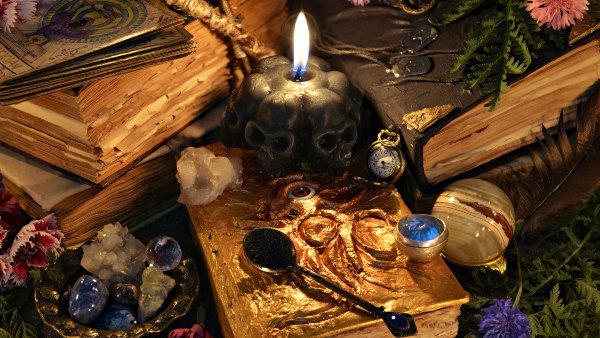 By James A. Haught

A friend of mine is a faithful religious who is trying to reform my pagan ways. He sent me an email saying:

God is love - period. He offers us eternal life through his son Jesus Christ who represented God and his love for humanity while he was on Earth. Jesus was crucified, died, buried, and rose from death to eternal life by the everlasting power of God. Jesus represents all of humanity to God, the father of Jesus and our father. We are one in Christ and Christ is one with the Father. Because of this new relationship or covenant with God, we will experience eternal life with Jesus and God our Heavenly Father. We will live with eternal bodies in a celestial kingdom outside of time…. We know this happens at the time of our death, giving all mankind eternal hope that our physical lives will not be lived in vain, without meaning or purpose.

These lovely words have a strong meaning for my friend, giving him a focus on his life. But I wonder: does he ever consider this to be just a fantasy concocted from words, with no real reality?

I think churches and theologians build imaginary images, with no hard evidence to back them up. It is simply a house of cards made up of rhapsodic words, but without substance. They make a picture of words of “eternal bodies in a celestial kingdom outside of time,” but the kingdom itself is not real.

In fact, the label "God is love" does not correspond to the Old Testament monster that killed multitudes of Egyptian children on Passover and drowned almost everyone in Noah's Flood. And that does not correspond to the divine creator who designed everything, including cancer, cerebral palsy, and spina bifida. Neither did the creator who designed tsunamis, hurricanes and earthquakes - and made hawks to kill rabbits or cobras to kill children. What kind of loving creator is this?

Stop and Think: Thousands of different religions have existed - from Aztecs sacrificing people to an invisible feathered serpent to Hindus praying on models of Shiva's penis, to Jehovah's Witnesses awaiting the battle of Armageddon to Mormons who think an angel showed a doomed con artist gold plaques - and each faith can be seen as a mere fantasy made of words.

It is easy to invent word fantasies. A strange example is the QAnon hoax involving hundreds of thousands of Americans. Here is the story:

In 2016, a far-right crackpot identified as "Q" circulated a false report on the internet that Hillary Clinton and other top Democrats, as well as Hollywood liberals and left-wing Jews, were operating a network secret of child sex. The report spread across many “fake news” websites, being posted and republished by the thousands. According to some versions, the evil conspirators served Satan and the New World Order.

A report says the child traffickers met at a Washington pizzeria called Comet Ping Pong. A credulous believer from North Carolina, Edgar Welch, traveled to Washington with an assault rifle and fired shots inside the restaurant. He said he came to save the kidnapped children. He drew four years in prison and admitted he had been "foolish and reckless".

QAnon's fantasy has spread widely across many websites. Different hosts forbid it, but it jumps on other sites. President Trump has posted more than 200 "tweets" that appear to encourage the hoax. Yet intelligent Americans realize that this is just a fantasy concocted with bogus words.

If you believe in the work we do here at the Good Men Project and want a deeper connection with our community, join us as a Premium Member today.

Premium members have the opportunity to view The Good Men Project with NO ADS. Need more information?


About six months before I turned 50, a friend tried to convince me to enter a physique contest. He had just turned 40, and was thrilled to be in the over-40 category because there were fewer guys for him to compete against. He said to me, “Kirk, you can win the over-50 category. There are only a few guys who enter. But, you have no lats or traps—most older dudes don’t. Work on your back and you got it in the bag ! ” I wasn’t too excited to enter a competition with “no competition, ” but I was pretty peeved to hear him say I had no lats or traps. My back was better than that. Although I had no intention to enter the competition, I started doing more single-arm dumbbell rows to work my back. Now, a few years later, it’s one of my favorite dumbbell exercises. Importantly, I’m not trying to break any records when it comes to weight here, like I might have in my younger days. Quality reps at low weight is the bigger focus.

There are versions of the exercise where you see guys use a bench for support, using a hand or even placing a knee on the bench. These have their merits ( although MH sport director Ebenezer Samuel, C. S. C. S. would rather you not put a knee up ). However, I mostly do the version with no assistance from the bench with both feet on the ground as points of contact. This version works your traps, rhomboids, rear delts and rotator cuff muscles, but you also get some core work, something you greatly need as you get older. Remember, though, that the way do the exercise is subjective to your own abilities. If you need some extra support for balance, don’t hesitate to put a hand down.

tera set up for my preferred variation, pick up a light dumbbell, especially to start. Stand with your feet in a parallel stance about shoulder-width apart. Hold the dumbbell in a neutral place at your side, as if you would for a hammer curl. Place your free hand behind you, with the back of your hand on the small of your back ( you can also extend your off arm out to balance ). Next, bend over by pushing your butt back and hinging at your waist, with your knees slightly bent. There should be no rounding of the spine, and you should keep your gaze down at the floor in a neutral neck place. Lastly, as you’re hanging onto the dumbbell with your arm pointing to the floor, squeeze your shoulder blades together so your shoulders lock in place and don’t slump.

By doing the dumbbell row unilaterally ( one arm at a time ), you’ll feel yourself being pulled off balance. You must fight with your abs and obliques to maintain balance and stability, which is why I love this exercise so much. Although you won’t be able to load up with as much weight as you would using the bench for stabilization, the extra core work you’ll get makes this version well worth putting in your arsenal of exercises. Try 4 sets of 8 to 10 reps during upper body workouts to get started.

We all know that it’s common for men to skip the doctor until they become sick, injure themselves or are faced with a serious health problem. And a majority of men will postpone seeking care for a few days to see whether they feel any better. It’s the whole ' if it ain’t broke, don’t fix it ' line of thinking.

But there are steps the men in your life can take today to improve their vitality and help prevent health problems down the road. Of course, there are some things that can’t be changed, such as family history and age, but every day choices can have a big effet on their current and future health.

Eating a diet that’s low in fat ( less than 7 percent of kcal should come from saturated fats ), cholesterol, and salt, and packed with fresh fruits and vegetables ( two cups of fruit per day; three cups of vegetables per day for men up to age 50 and two and a half cups for men aged 51 and over ), whole céréales and fiber can help improve your health, prevent heart disease, diabetes and certain cancers.

Try to get 30 minutes of moderate physical activity on most days of the week. Taking a walk, jogging, swimming and mowing the lawn all count. But don’t be a weekend sports warrior. Start slowly if you aren’t normally réactive and gradually build up. No time ? Research shows that even short bursts of physical activity—as few as 10 minutes of intense activity several times a day—can help men improve their health. Talk to your doctor about the right exercise program for you.

It’s important to maintain a healthy weight. Excess weight, especially around the waist, can be on your body. Carrying too much body fat forces your heart to work harder and increases your chances of heart disease and stroke, even if you have no other risk factors ! So, try to curb weight gain as you age.

Tobacco smoke contains more than 4, 000 chemicals and is a known cause of cancer. Smoking also increases the likelihood of high blood pressure, heart disease, lung problems and other health problems. And if you think chewing tobacco is safer, think again. Not only is chewing tobacco a known cause of cancer ( carcinogen ), it also contributes to gum disease and tooth loss and may be linked to fertility problems. And, few could argue that chewing and spitting is attractive to a partner. If you smoke or chew, talk to your health care professional about ways to quit. Consider nicotine replacement therapy products that include self-help programs, if appropriate.

Whether it’s pulling out the weed whacker, going for a bike ride or grilling with the neighbors, safety is key. Here are just a few examples : Take care when moving heavy objects. It’s easy to strain yourself when lifting boxes, furniture and other heavy items. Use your knees and legs and not your back for leverage. And ask for help, if you need it. Wear appropriate protective gear for your eyes and ears when using leaf blowers, lawn mowers and other machines at home or work. Excessive exposure to noise is the most common cause of hearing loss. Wear a helmet when you ride a bike or ski and throw on reflective clothing if you go for a run after dark. When grilling, never leave the grill unattended, especially when small children and pets are around, and keep a fire extinguisher handy. The grill should be at least 10 feet from your house or any building. tera protect your skin, avoid prolonged exposure to the sun and apply ( and reapply ) sunscreen with an SPF of 15 or greater that provides protection against UVA and UVB rays.