Skip to the content
International Travelers Invited To Join 25-Year Anniversary Tour
admin
November 22, 2020
11:10 am
0
Football players, coaches and families who travel abroad with Global Football all share the same feelings when they recall their adventures abroad: they lived the trip of a lifetime and their trip created memories that will last forever. Today, as Global Football celebrates 25 years of combining educational and pursuit circuits, Founder and President Patrick […]

Football players, coaches and families who travel abroad with Global Football all share the same feelings when they recall their adventures abroad: they lived the trip of a lifetime and their trip created memories that will last forever.

Today, as Global Football celebrates 25 years of combining educational and pursuit circuits, Founder and President Patrick Steenberge offers former travelers the opportunity to have fun again - and take a second trip of their life.

The 17,000 people from 370 schools and teams who have explored 28 nations on six continents over the past quarter century are now invited to travel to Italy's spectacular Amalfi Coast, Sorrento and Rome for a luxury tour. Reservations can be made and a full itinerary can be found on the Anthony Travel website: https://book.anthonytravel.com/r/global-football/global-football-25th-anniversary-tour-pkg-9744

“I have had the pleasure of traveling and sharing so many wonderful places over the past 25 years with amazing people: student athletes, coaches, parents and families,” said Patrick. “A lot of them became instant friends, some kept in touch, but each of them touched me in one way or another. Now I think it's time to celebrate, to bring together everyone who has traveled with Global Football since 1996 for a unique 9 day tour of Italy, with the Amalfi Coast, Sorrento and Rome.

Reconnect with your teammates, bring your family if you wish, tell stories from your previous world tour, all while enjoying an easy trip, this time without football! I can't wait to join you and find out where life has taken you since the last time we met in a foreign country.

Travelers will depart the United States on October 17 for Rome and, after settling into a lifestyle hotel, will have the opportunity to explore the historic city before attending a welcome dinner. Three fantastic days in the Italian capital will include a visit to a gladiatorial school and guided tours of the Colosseum, the Vatican Museum, the Sistine Chapel or Castel Sant'Angelo and St. Peter's Basilica.

Transfer to Sorrento, travelers will check-in at Grand Hotel Riviera Sorrento and then the next day, enjoy a panoramic tour along the Amalfi Coast and visit Positano and Amalfi. A guided tour of the ancient ruins of Pompeii or Herculaneum will be followed by a pizza lunch on the slopes of Vesuvius and a visit to the vineyards of Lacrima Christy with tastings.

One of the highlights of the trip will be a private boat trip to the island of Capri and a farewell dinner in Sorrento at the famous Ristorante Bagni Sant'Anna. Returning to Rome to complete a second trip of a lifetime, the party of world football will visit the Pantheon, the Spanish Steps and the Trevi Fountain, then celebrate with a 25 year anniversary dinner. 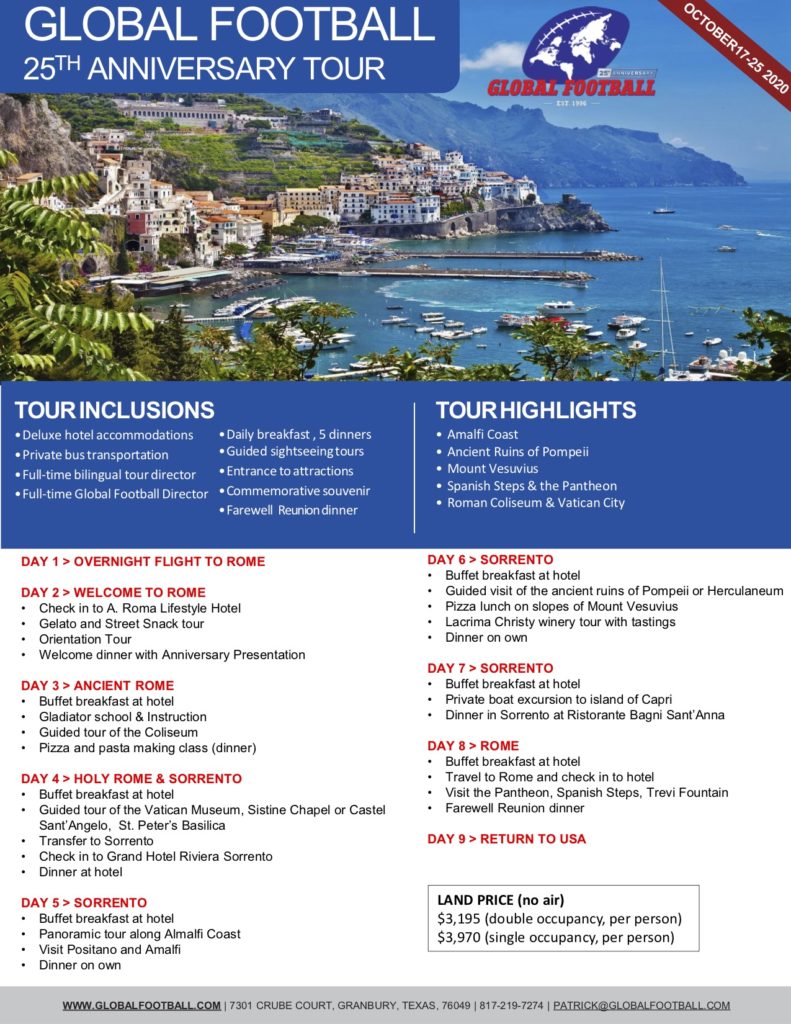 Know the main point of the game. The goal of American is to score points by carrying the ball from a starting point on a 120-yard long and 53. 3-yard wide field into a specially marked 10-yard-deep area at either end of the field called an end zone. Each team uses the end zone in front of them to score while trying to prevent the opposing team from reaching the end zone behind them. [1] Each end zone has a Y-shaped structure called the field goal which is positioned on the end line. The field goals are used to score points with special kicks

Learn the time divisions. Football is divided into four quarters of 15 minutes each, with a break between the second and third periods called “halftime” that is normally 12 minutes long. [3] While the clock is active, the game is divided into even shorter segments called “plays ' or ' downs. '

The opening kickoff - At the very beginning of the game, the head referee flips a coin and the home team captain calls out which side of the coin will be face up. If acceptable, that captain may choose to kick off or to receive the opening kickoff or allow the visiting team captain to make that choice. Once the kicking and receiving teams are decided, the team captain who lost the coin toss gets to decide which goal his or her team will defend during the first half. This initial play is called the kickoff, and typically involves a long kick down field from one team to the other, with the team that kicked the ball rushing towards the team receiving the ball in order to prevent them from course the ball a long ways back towards the kicking team’s end zone. After halftime, there is a deuxième kickoff by whichever team did not perform the opening kickoff. Throughout the second half, the end zones each team defends is the one opposite the end zone that team defended in the first half

This means that a team that moves the ball 10 or more yards on each play will never be on the deuxième down. Every time the ball is moved 10 yards ( 9. 1 m ) or more in the proper direction, the next play is a first down with 10 yards ( neuf. 1 m ) to go.