Skip to the content
REMEMBERING A RECORD DAY IN NEW YORK – ~ Wandering in a Running World ~
admin
November 22, 2020
7:21 am
0
On this Sunday, the first day of November 2020, when the world of running should have been gathered to celebrate the 50th TCS New York Marathon, we are rather sequestered by the disease, disturbed by an imminent election, or managing virtually but only the five boroughs of New York on foot. In a small attempt […]

On this Sunday, the first day of November 2020, when the world of running should have been gathered to celebrate the 50th TCS New York Marathon, we are rather sequestered by the disease, disturbed by an imminent election, or managing virtually but only the five boroughs of New York on foot.

In a small attempt to dispel an ominous mood hovering over a troubled land, here is a recollection of the good times, both literal and figurative, from newspaper # 182, recalling November 6, 2011, a record-breaking day in the city.

The calm and clear sky welcomed a record-breaking 47,107 lucky runners in the 42nd New York Marathon gathered atop the Verrazano Narrows Bridge spanning Staten Island and Brooklyn. With a temperature hovering at 40 ° F cooled and an expected increase of just 56 ° F (13 ° C), who could ask for more? 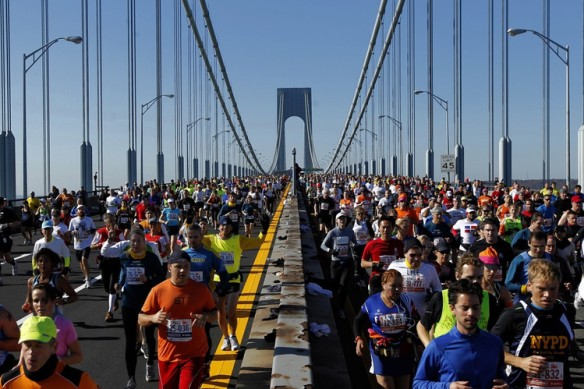 Besides the NYCM title itself, two other factors would come into play on the men's side on that day. Although unofficial, the 2011 New York Marathon would serve as the Olympic selection for several great Kenyans, including Geoffrey and Emmanual mutai (unrelated) Boston and London course record holders.

With two times world champion Abel Kirui and world record holder Patrick makau having already been selected for London 2012, only one place remains open. President of Kenyan Athletics Isaiah Kiplagat said the decision will be made after today's race.

Another factor will be the completion of 2010-2011 World Marathon Majors series. Five men remained in contention for the series title and the top prize of $ 500,000.

Emmanuel Mutai was in the best position, occupying second in the pre-race standings just five points behind Berlin marathon champion Patrick Makau, who had finished his season. A win or second place today would close the series victory for Emmanuel. If he took the third or the worst, it would open the door to Geoffrey Mutai, Tsegaye Kebede and Gebre Gebremariam if they could snatch victory.

The women left first. The big favorite was the Kenyan Mary keitany, the London marathon champion looking to respond to Russian Lilya Shobukhova's 2:18:20 victory in Chicago last month. Mary made her New York City debut in 2010, but at the time was still a novice, doe in the headlights, overwhelmed by the size of the city and the prospect of her first marathon. She finished third behind compatriot Kenyan Edna Kiplagat and American Shalane Flanagan as the three played a cautious game until the end.

Today, more timid, the little Kenyan lit up Staten Island as if there was a closing sale in Manhattan. She was alone as she turned right onto Fourth Avenue in Brooklyn, exiting the Verrazano Narrows Bridge.

Half an hour after the women, the men took off, this time without leaders. The large contingent started small, 24:40 to 5 miles, just 2:09 steps. But as they weaved their way through the leafy neighborhoods of Brooklyn, they began to steadily cover less than 4:50 miles (3:00 / km) until they approached a record pace.

In the lead, Keitany stretched his lead with each passing kilometer, reaching half-time in 1:07:56, a madness in the layout of the five bridges. Behind, a peloton of four formed, also under a record pace of the course, reaching a half in 1:10:08. They included Ethiopians based in the Bronx Buzunesh DebaEthiopian compatriots Werknesh Kidane and Firehiwot Dado, with the Boston champion Caroline Kilel from Kenya.

In 2001, Tesfaye Jifar Ethiopia set the New York course record at 2:07:43, the longest standing course record of the five World Marathon Majors. But with the deep field and ideal conditions today, it seemed more than possible that we were going to see new broken ground.

Behind hid the pursuers, led by Deba. But it would take more than a quick pace from behind to overcome the gap, Mary should also hesitate.

Off the Queensboro Bridge and on Thunder Alley, the men of the 42nd New York Marathon have mapped their flight plans on First Avenue. But today, with a strong field of six still in formation, the men held their afterburners, breaking through the middle of 4:40 miles rather than the usual low of 4:30. Geoffrey and Emmanual Mutai, beginner Matthieu Kisorio, American Meb Keflezighi, Jaouad Gharib of Morocco, and Tsegaye Kebede of Ethiopia remained in close formation with the tiny Kebede, 2008 Olympic bronze medalist, on the attacking point.

At 20 miles, crossing the Willis Avenue bridge in the Bronx, Buze Deba and Firehiwot Dado freed themselves from Werknesh Kidane and Caroline Kilel. This is where Buze has lived and trained since 2005. She led the pursuers throughout the race as Keitany continued to leak oil ahead.

At 2:15 a.m., the three ladies were together. But rather than huffing through the fading Keitany, Dado and Deba discovered a Lazarus-like response from the brave Kenyan as she reopened a small space!

Six men crossed the 20 mile mark in 1:36:21 with a marathon pace of 4:52 miles, 2:06:13. For the first time, Boston record holder Geoffrey Mutai stepped on the accelerator, shattering the field with a single kick.

Gebremariam and Kebede, the two Ethiopians, tried to answer, but to no avail.

Realizing that the World Marathon Majors title and a $ 500,000 bonus was still up for grabs, Emmanuel Mutai moved up to second place, which would be enough to lock in that prize.

After her initial response to Dado and Deba, Mary Keitany started to fade again. 25 miles passed at 2:16:35 after a mile of 5:53. Now Firehiwot Dado was breaking free from Buzunesh Deba and the broken form of Mary Keitany.

She lost some steam in the final 400 yards at Central Park as Deba rallied behind a supporting local crowd, but it wasn't enough. Dado crossed the finish line in 2:23:15, Deba three seconds later, Keitany 20 seconds more.

Geoffrey Mutai ripped the 10km final in New York City in 28:43, not even in a rush. He widened his margin like he was on an airport mover. His victory time of 2:05:06 broke the course record of 2:37 more than confirming his Boston record of 2:49 in April.

It was a glorious day in the city. In those moments of opposition where everyone seems to oppose one thing or another, the Marathon, especially the one in New York, has shown its ability to make us believe once again in ourselves and in our neighbor, to see the good that exists. in all of us, believing that if we work hard and come together, we can do anything. On November 7, 2011, many did.


If you’ve never run before or you’ve had a long break from course, it can feel intimidating to get out there and hit the pavement. But if you get familiar with some basic information about course and follow a beginner’s schedule, you’ll be well on your way to starting a new running habit.

At your visit, share your course plan and goals with your doctor and have him/her assess your plan and any potential health issues. If you have had any previous injuries or issues, make sure your doctor is aware of them, and ask if he or she has any suggestions on how to prevent a recurrence.

Visit a specialty course store to get expert advice on buying the right running shoes. An professionnel at the store will look at your feet, watch you run, and make recommendations based on your foot type and running style. If you already have course shoes that you like, but you’ve had them for a while, you may still need to get new ones. Running in worn-out running shoes can also lead to injury. You should replace them every 300 to 400 miles.

Beyond course shoes, you don’t need much more than some comfortable exercise clothes to get started. If you’re running outdoors, make sure you follow some basic tips for how to dress for hot weather course and cold weather running, so you stay safe and comfortable.

As your résistance improves and you start running longer, you may want to invest in some technical fabric running clothes and other basic course gear, such as a running belt, good running socks, and a course hat. Some runners also like to have a running watch to track their times and mètres.

Before you get started with course, get familiar with how to do the run/walk method. Most beginner runners start out using a run/walk technique because they don’t have the endurance or sport to run for extended periods of time. The run/walk method involves course for a short territoire and then taking a walk break. As you continue with a run/walk program, the goal is to extend the amount of time you’re course and reduce your walking time. Of course, some runners find walk breaks to be so beneficial that they continue taking them even as their endurance and sport improves.

Before you start any running workout, though, you need to make sure you warm up properly. A good warm-up signals to your body that it will have to start sérieux soon. By slowly raising your heart rate, the warm-up also helps minimize stress on your heart when you start your run. Start your runs with a brisk walk, followed by very easy jogging for a few minutes. You can also do some warm-up exercises. Always end your workout with a slow five-minute jog or walk to cool down. The cool-down allows your heart rate and blood pressure to fall gradually.

Use your breathing as your guide when course. You should be able to carry on a conversation while course, and your breathing shouldn’t be heavy. Don’t worry about your pace per mile—if you can pass the ' talk test ' and speak in complete sentences without gasping for air, then you’re moving at the right speed.

Make sure you’re breathing in through your nose and mouth, and breathing out through your mouth. Proper breathing and taking deep belly breaths will help you avoid annoying side stitches, or cramps in the abdomen area.

Drink water at the end of your workouts to rehydrate. If it’s hot and humid, you should also drink some water ( about four to six ounces ) halfway through your workouts. ​

Post-run is a great time to stretch and work on improving your flexibility because your zones musculaires will be warmed up. It’s also a relaxing way to end a workout. Try some of these stretches that target particular areas that frequently get tight during and after running.