Skip to the content
5 Reasons To Love Caddyshack
admin
December 7, 2020
3:19 pm
As I'm lying on my couch over the holidays, my favorite movie to watch again isn't a classic Christmas movie like "Home Alone", "Die Hard" or "National Lampoon's Christmas Vacation", it's Caddyshack. I am taking this holiday season to celebrate Caddyshack's 40th anniversary. It opened in theaters in July 1980. Yeah, I know it has […]

As I'm lying on my couch over the holidays, my favorite movie to watch again isn't a classic Christmas movie like "Home Alone", "Die Hard" or "National Lampoon's Christmas Vacation", it's Caddyshack.

I am taking this holiday season to celebrate Caddyshack's 40th anniversary. It opened in theaters in July 1980.

Yeah, I know it has nothing to do with the holidays, I love to watch it. Again and again…

1. It's just plain fun, sometimes scorching and most of the time sophisticated

I have to admit that some of the more steamy and almost juvenile scenes make me laugh the most. Like baby Ruth in the pool, Al Czervik “Hi everyone! We're all gonna win% @ &% ”and when Al turns to Ms. Smails and says,“ You want to make $ 14 the hard way? My favorite line in the movie is when Judge Smails yells at Spaulding and says, "You won't get anything and you will like it." I don't know why, but I laugh my ass off every time Ted Knight delivers it perfectly.

2. Takes us back to simpler times

The film is the personification of politically incorrect on so many levels and that's why I enjoy it. You couldn't make the film in these very sensitive times. If you tried, you would be banished to the social media jail for being a Neanderthal, misogynistic, rude jerk. In the 1980s, comedians were actually funny because they had fewer limits on where they could take their humor. Now all we get are boisterous acts like Jimmy Kimmel and Trevor Noah.

The cast of Caddyshack was an absolute genius. Can you really imagine anyone other than Bill Murray playing Carl Spackler, Rodney Daingerfield playing Al Czervik or Ted Knight as Judge Smails. They are all in my personal Hall of Fame great people with Barney Fife, Vito Corleone, Hannibal Lecter and Harold Francis Callahan (Dirty Harry).

4. Take a look behind the scenes of the world of golf

Caddyshack tackles caddies, golf course betting, and maintenance workers in a wonderfully fun and entertaining way. Carl Spackler and the gopher are heroes in many ways. Equally interesting is how the film pits snoo-tay country clubber Judge Smails against clownish intruder Al Czervik. It's basically Joseph Golfer vs. Joe Golfer in a battle royale of hilarious scenes.

Chevy Chase, Bill Murray, Ted Knight, and Rodney Daingerfield are all on My Mount Rushmore great comics with exceptional timing and an understanding of how to make a character both hilariously funny and believable at the same time. Years ago I worked in a nightclub and was able to talk to Daingerfield for about half an hour. What a brilliant, kind guy. If only they could've worked in Leslie Nielsen, my all-time favorite comedic actor just behind Rodney. 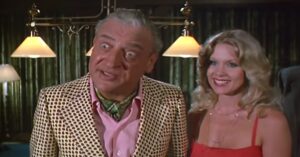 Where's the popcorn and the brewski, I'm ready to review Caddyshack….

Are you a Caddyshack fanatic? If so, you have to check out my store with t-shirts, hoodies, tanks, masks and caddyshack mugs as well as gear inspired by epic masters. Click The Golf Travel Guru store order.

I’ve been playing golf for about 15 years and while I’m a mid-handicapper with a decent shortgam, the longest putt I’d made before thi was around 40 feet.

My friends and I discovered the record was 125 yards and decided it would be fun to have a go at breaking it. Finding a course in good shape and willing to give us exclusive access to a hole for a significant length of time was tricky, but the idea of a Guinness World record being set excited the directeur of Point Walter in my home city of Perth, Australia, so he gave us exclusive access to the 5th hole for an entire day.

Early on we realised the previous mark would be really hard to beat, but we were optimistic that it was possible. We just needed to get it going on the right line at the right speed... simple !

After that I needed to nail the pace as I was bermuda, long and even slammed one into the flagstick. That really hurt. It was about 90 minutes in and my friend Scott was shouting “Get in. Come on, get in”. His arms were waving, his étendue was increasing and then, bang, I heard the ball hit the flagstick and the guys groan in disbelief. Would I get any closer than that for the rest of the day ?

The two most common questions I’m now asked are : which plage record are you going to attempt to break next ? And what advice do you have for someone attempting to break your record ? In terms of the next record, I haven’t really thought about it, as I am too busy enjoying this one ( although if you pushed me, it would be something solution like longest putt holed from a moving l'océan cart ).

I’ve been playing centre ville for about 15 years and while I’m a mid-handicapper with a decent shortgam, the longest putt I’d made before thi was around 40 feet. I could feel my heart beating really fast when I stepped up to take the opening tee shot on Tiger woods’ new course for juniors at Bluejack National. If it wasn’t nerve wracking enough that I’d been selected to play with one of my favourite golfers, there was also the biggest crowd I have ever played in front of in my life. What would happen if I flubbed it ?

Like underarmour and Tiger, I’d love to win the Masters at Augusta, but unlike them I am still not certain if I want to be a golfer, as I also love baseball. If I do become a golfer hopefully I will have a few more holes- in-one in front of big crowds, as this one was really cool.

I’ll never forget the 2016 Ryder Cup. Not because the United States finally won the trophy back, but because some members of the European team allowed me to real a phenomenal golfing experience. My friends and I had arrived at Hazeltine on the Thursday and found a spot beside par-3 8th green to watch a few groups on their practice rounds. The first featured Rory McIlroy, Henrik Stenson, Justin rose and Andy Sullivan.