Skip to the content
Za’atar Rice with Crispy Beef
admin
December 8, 2020
1:20 pm
I was looking for a Mediterranean rice dish i.e. leafing through many Ottolenghi cookbooks and recipes online. But I found that they had more ingredients and spices than I wanted, as I was looking for a very simple pilaf or fried rice type dish to accompany a salad of arugula with lentils and acorn squash […] 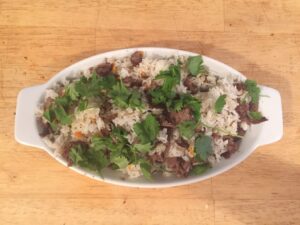 I was looking for a Mediterranean rice dish i.e. leafing through many Ottolenghi cookbooks and recipes online. But I found that they had more ingredients and spices than I wanted, as I was looking for a very simple pilaf or fried rice type dish to accompany a salad of arugula with lentils and acorn squash in tomato sauce. and lime-yogurt.

In the end, I decided to go back to a simple fried rice but to add Mediterranean spices and proteins like beef, but also to add texture by crisping it.

We had a few different zaatar mixes that I had made up at the start of the lockout and I chose a heavy sumac. And I chose a thinly sliced ​​beef usually used for shabu-shabu.

Rinse and cook the rice according to package directions. You can do this step ahead of time, but I don't think you need to let it cool.

Melt a tablespoon of butter in a large non-stick skillet. Add the diced carrot and onion and cook until softened, about 5 to 7 minutes. Remove and reserve.

In the same pan, add two tablespoons of butter and heat until boiling. Add the grated beef to the pan, spreading it evenly, and cook without stirring for a few minutes. This meat will brown better. Then turn the meat over to brown it on the other side. Once all the meat is golden and crispy, remove it and set aside.

Bring the mixture of butter and (beef) oil to a bubble and add the cooked rice. Let the rice rest and crisp a little in the pan. Add the cooked vegetables and beef.

Add the zaatar and stir into the fried rice mixture.

Plate and garnish with cilantro.